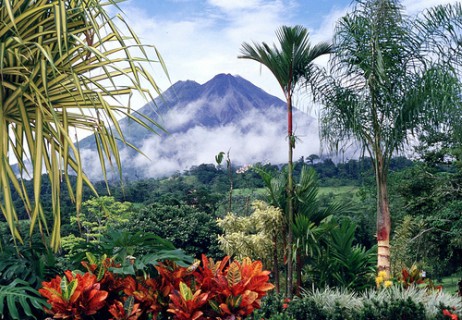 HURRY! Round-trip from Atlanta:
$390 San Jose, Costa Rica, or $178 south, $212 north
Valid most days southbound starting on or after August 1 through October 31
Valid most days northbound starting on after September 11
Finish trips on or before February 11, 2019
Valid on American via Miami
Booking tip: Purchase as one-way tickets (round-trip prices higher)
Compare to Delta’s regularly published rates of $717

Safe Travel
Staying safe while you travel abroad isn’t so different from avoiding crime in your very own neighborhood. Don’t carry too much cash. Don’t leave your things unattended. Leave the jewelry at home. Be aware of the surrounding, who’s around you, and what they’re doing.
Here are some often used scams, and some new ones to be aware of:
The Turkey Drop: The named was coined by the U.S. Department of State. It’s a common scam where you end up as the turkey. It all starts when you notice a dropped wallet on the ground. Then a stranger appears, pick up the wallet and ask if it’s yours. They might even toss it to you; the goal is to get you to touch or hold the money. That’s when the scammer’s accomplice yells, “That’s my wallet!” and accuse you of trying to steal it. At that point, the scammers join forces against you. There are several variations of this endgame. In the first, the strangers threaten to hand you over to the police if you don’t bribe them handsomely. In the second, they demand that you show your money to prove you didn’t steal theirs. The second your wallet is out in the open, they grab it and run. In another variation, another “tourist” gets involved and suggests sharing the found money. Then the fraudsters appear claiming the full amount.
Storage Locker Scam: Never accept the offer of what appears to be an act of kindness at bus or train stations and at airports. Scammers will offer to save you money by passing on the key to a storage locker they just checked out of. If you accept, the scammer will unlock your storage area after you depart the area with a copy key.
The Wallet Drop:  You’re sitting in an airport, train station or in a public spot with all your bags and spot a wallet dropped on the ground. You pick it up and run to give it back. The stranger thanks you, and you run back to your seat minus your possessions. An accomplice has made off with all of your stuff.
Don’t Display Wealth: Even a broke student backpacker from the U.S. looks fabulously wealthy in southeast Asia. Walk with confidence and feigning indifference to your surroundings. That may mean leaving your expensive camera in the bag and practice a little restraint when taking a selfie. Keep daily walking around money separate from the rest of your travel money. Consider carrying a decoy wallet when in areas known for pickpockets. Get a cheap old wallet and fill it with expired credit cards and a small amount of cash. If someone tries to mug you, hand them the fake wallet, while your real nest egg remains hidden beneath your shirt.
Learn more about travel scams at the State Department’s Travel pages .
Before a journey, enroll in the Smart Traveler Enrollment Program or STEP . Through this free service, U.S. citizens can share their travel plans with the nearest U.S. Consulate or Embassy. STEP will alert travelers via mobile text in extreme situations such as natural disasters, civil unrest, or family emergency.

Mobile Passport
You know about Global Entry, but what about Mobile Passport ? The free app gets you quickly through U.S. Customs when entering the U.S. at one cruise port and 24 airports.
This app effectively replaces the traditional blue-and-white paper declaration form handed out just before landing in the states and on the sea before embarkation.
Simply answer the same questions as the paper declaration form (Are you bringing back fruits and vegetables? and Are you carrying more than $10,000?), and then get a digital receipt that allows you to use the express lane to enter the United States.
When using the Mobile Passport app to re-enter the states, you will not have to wait in the long, snaking lines and will breeze through customs and immigration faster than those at Global Entry kiosks.
Download the Mobile Passport app for either Android or iOS stores the passport number, expiration date, and a photo.
On arrival to the states from overseas, switch off airplane mode,  and open the app. Submit answers while taxiing to the terminal, and the app will provide a QR code “receipt” that you can use at customs and immigration in lieu of the traditional paper form.
Inside the arrivals hall, look for the designated Mobile Passport lane. An agent will check your passport, scan your receipt, and send you onward to customs, where you can once again take the special Mobile Passport lane to skip any lines.

Airfare offers – ones with a ticket-by date – and deals with our suggestion to HURRY!  can expire at any time.   Heed Clark’s advice: Buy that great airfare deal – and then figure out a reason to go there! Eventually, you’ll see the world at a fraction of the normal price!

One-way from Atlanta, each way:
$168 Cancun
A 21-day advance purchase required
Depart through May 17, or August 21 through October 31
Travel to Cancun Sundays-Wednesdays; from Cancun Tuesdays-Fridays
Purchase by March 29 at Southwest Airlines

One-way from Atlanta, each way:
$235 Punta Cana, Dominican Republic
Depart through May 17, or August 21 through October 31
Valid Monday-Thursday in each direction
Purchase by March 29 at Southwest Airlines

HURRY! Round-trip from Atlanta:
$262 Cabo San Lucas, Los Cabos
Valid Saturdays only in April
Also valid on September 8-December 8 departures (up to 3x week)
Complete travel on or before December 19
Valid on United via Houston

HURRY! Round-trip from Atlanta:
$416 Barbados
Depart April 16-June 27 or September 3-November 19
Finish trips on or before December 18
Valid on American via Miami

How do you find these great airfare deals? Visit Clark’s Atlanta Travel Tips page for a step-by-step search and booking guide.

NOTE: Airline fees can and often do exceed the cost of your flight! Additional charges now apply to budget and sale rates on most airlines for a carry-on bag, checked baggage and advance seat assignments. The least expensive fees are charged when these options are purchased during the ticket booking process. Fees climb higher after flights are reserved and even higher when adding these options at airport check-in. Kayak offers the most up-to-date Fees Chart for all domestic and international airlines.

Luxe NYC
Rates from $199, including a $50 food and beverage credit are offered on Thursday-Sunday stays at the chic Kimpton Ink48 Hotel, named as one of NYC’s Top 50 hotels by Conde Nast Traveler.
This special rate is valid on April, July and August stays – and over the Memorial Day weekend (May 24-28).
Rates range from $219-$239 most Mondays-Wednesdays in April, July-August.
Or, travel to see the spectacular July 4th fireworks and stay from $169 from July 1-8.
Many nights in May and June are also discounted.
The hotel offers beautiful views of the Hudson River and the city skyline, yet is tucked away from the city’s noisiest streets. This sophisticated hotel is also within walking distance of Hell’s Kitchen and Times Square, several major subway lines and a variety of dining options.
Newly renovated guest rooms have oversized windows.
Onsite venues include a farm-to-table restaurant and one of the city’s best rooftop bars.
Guest amenities include a daily hosted wine reception, complimentary morning coffee and tea service, free bike rentals and a yoga mat in every room. The hotel’s convenient and quiet location on the edge of Hell’s Kitchen put it within a few blocks of Times Square, several major subway lines and a variety of dining options.
Book soon and start the reservation process at Travelzoo .
Also, check out the deals at Travelzoo on NYC theater tickets .

Get the first word on limited seat sales. Follow us on Social: