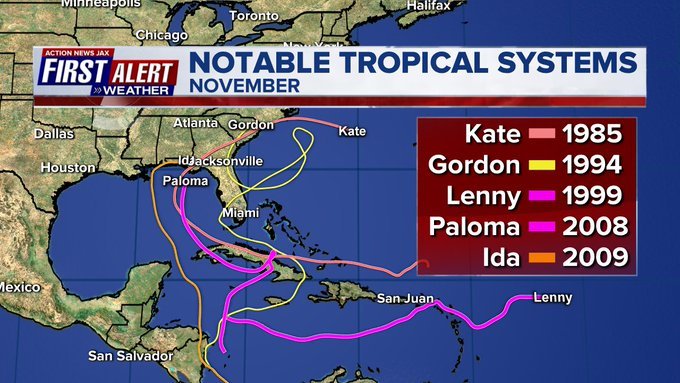 For the 2nd year in a row, we're having a very warm autumn.  October was the 6th warmest on record for Jacksonville & the warmest since 1981.  Every month this year so far has been above avg.: 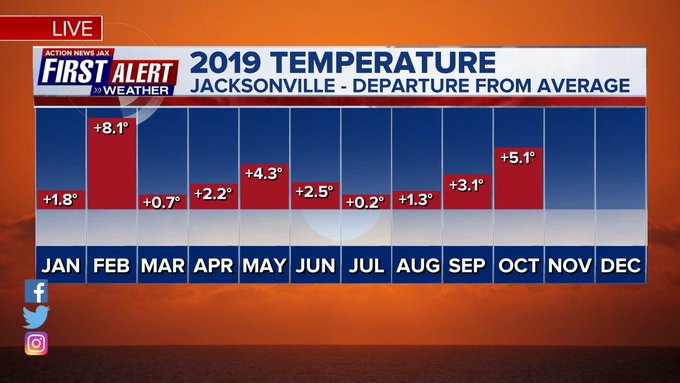 Speaking of rainfall....now that we're in standard time, residents are only allowed to water their yards & landscaping once a week.  Though typically drier this time of year, days or shorter & temps. are cooler so less water is generally needed.  From St. Johns River Management District:

Starting Sunday, Nov. 3, homeowners and businesses will fall back to once-a-week landscape irrigation across the 18 counties of the St. Johns River Water Management District. Nov. 3 is the day that Eastern Standard Time begins. "Healthy lawns in our area require no more than one day a week of irrigation during cooler weather, based on scientific analysis from the University of Florida," said St. Johns River Water Management District Executive Director Dr. Ann Shortelle. "So, when you change your clocks Saturday night, be sure to also reset your sprinkler timers to water only on the designated day for your address. And thanks for doing your part to protect Florida's water resources!"

The district's new Water Less campaign features four seasonal themes, starting with "Fall Back" in November to encourage once-a-week watering as temperatures begin cooling. Public water supply is the largest category of water use in the district's 18-county region — about 565.5 million gallons of water a day. The bulk of this water is for residential water use, and landscape irrigation can account for more than 50 percent of total water use at residential locations. Because lawns need significantly less water in Florida's winter months, watering restrictions are in place to ensure that water used for irrigation is used efficiently.

During Eastern Standard Time, landscape irrigation is limited to no more than one day a week on the following schedule:

• Sunday at addresses that end in an even number

Irrigation restrictions apply to all landscape watering not currently regulated by a consumptive use permit, which typically includes residential, commercial and industrial landscapes, and includes water withdrawn from ground or surface water, from a private well or pump, or from a public or private water utility. Golf courses, plant nurseries, agricultural crops, and sports recreational areas generally have consumptive use permits that specify their irrigation limitations.

Massive Amazon wildfires made headlines in Sept. with the typical flippant blame placed solely on climate change.  But as is often the case, there are extenuating circumstances:

A new NASA study shows that over the last 20 years, the atmosphere above the Amazon rainforest has been drying out, increasing the demand for water and leaving ecosystems vulnerable to fires and drought. It also shows that this increase in dryness is primarily the result of human activities.

"We observed that in the last two decades, there has been a significant increase in dryness in the atmosphere as well as in the atmospheric demand for water above the rainforest," said JPL's Armineh Barkhordarian, lead author of the study. "In comparing this trend to data from models that estimate climate variability over thousands of years, we determined that the change in atmospheric aridity is well beyond what would be expected from natural climate variability."

So if it's not natural, what's causing it?

Barkhordarian said that elevated greenhouse gas levels are responsible for approximately half of the increased aridity. The rest is the result of ongoing human activity, most significantly, the burning of forests to clear land for agriculture and grazing. The combination of these activities is causing the Amazon's climate to warm.

When a forest burns, it releases particles called aerosols into the atmosphere - among them, black carbon, commonly referred to as soot. While bright-colored or translucent aerosols reflect radiation, darker aerosols absorb it. When the black carbon absorbs heat from the sun, it causes the atmosphere to warm; it can also interfere with cloud formation and, consequently, rainfall.

The Amazon is the largest rainforest on Earth. When healthy, it absorbs billions of tons of carbon dioxide (CO 2 ) a year through photosynthesis - the process plants use to convert CO 2 , energy and water into food. By removing CO 2  from the atmosphere, the Amazon helps to keep temperatures down and regulate climate.

But it's a delicate system that's highly sensitive to drying and warming trends.

Trees and plants need water for photosynthesis and to cool themselves down when they get too warm. They pull in water from the soil through their roots and release water vapor through pores on their leaves into the atmosphere, where it cools the air and eventually rises to form clouds. The clouds produce rain that replenishes the water in the soil, allowing the cycle to continue. Rainforests generate as much as 80% of their own rain, especially during the dry season.

But when this cycle is disrupted by an increase in dry air, for instance, a new cycle is set into motion - one with significant implications, particularly in the southeastern Amazon, where trees can experience more than four to five months of dry season.

"It's a matter of supply and demand. With the increase in temperature and drying of the air above the trees, the trees need to transpire to cool themselves and to add more water vapor into the atmosphere. But the soil doesn't have extra water for the trees to pull in," said JPL's Sassan Saatchi, co-author of the study. "Our study shows that the demand is increasing, the supply is decreasing and if this continues, the forest may no longer be able to sustain itself."

Scientists observed that the most significant and systematic drying of the atmosphere is in the southeast region, where the bulk of deforestation and agricultural expansion is happening. But they also found episodic drying in the northwest Amazon, an area that typically has no dry season. Normally always wet, the northwest has suffered severe droughts over the past two decades, a further indication of the entire forest's vulnerability to increasing temperatures and dry air.

If this trend continues over the long term and the rainforest reaches the point where it can no longer function properly, many of the trees and the species that live within the rainforest ecosystem may not be able to survive. As the trees die, particularly the larger and older ones, they release CO 2  into the atmosphere; and the fewer trees there are, the less CO 2  the Amazon region would be able to absorb - meaning we'd essentially lose an important element of climate regulation.