Eye on the Northern Gulf of Mexico where tropical storm Barry will be soon developing.  Low pressure continues to try to organize.  Winds below 39 mph = a depression; 39+ mph = tropical storm; 74+ mph = hurricane. Movement will continue to be to the west then northwest away from Florida.  There will be no direct impacts for Jacksonville/NE Fl. & SE Ga.:

* some uptick in rainfall & heavy rain potential with bands of showers & thunderstorms rotating northward far to the east of the low pressure.

* a slight increase in swells & onshore flow through Fri. helping to create an enhanced rip current risk at area beaches.

* everyone from the Panhandle west through Mobile, & especially Biloxi, New Orleans to the Texas coast should stay up to date on the latest forecasts

The average date for the first Atlantic tropical system is July 9th, so we're about "on schedule".  The evolution of this system will be gradual - at least at first. The last two U.S. landfalling July tropical systems were tropical storm Emily in 2017 (Central Florida) and hurricane Arthur in 2014 (N. Carolina).

As for Jacksonville & all of Fl., the local area will be the broad southerly flow to the east of the center meaning an increase in tropical moisture helping to create bands of northward moving showers & t'storms, especially during the afternoon & evening hours.  Much more major impacts will be further west.  Upper level high pressure over the Western U.S. + a weaker upper level high pressure cell near Florida will allow for an alleyway of sorts along the Gulf Coast helping to induce an eventual turn northward.  The position & strength of these upper level high pressure areas will be key in the ultimate turn north of "Barry" & just how far west the system may end up.  Odds are increasing on a landfall of an intensifying tropical cyclone a little west of New Orleans.

The landfall for Barry - possibly as strong as a hurricane - looks to be Saturday west of New Orlenas. Everyone from the Fl. Panhandle west along the Gulf Coast to Texas should stay up to date on this developing storm.  Extreme rainfall - 2 feet or more - is possible for parts of Louisiana & Mississippi & major flooding is of great concern aggravated but what has been a wet spring & early summer with already high levels on the Mississippi River & its tributaries.  Significant storm surge will occur over SE Louisiana & coastal Mississsippi & - to some degree - for coastal Alabama.

Tropical systems like to follow the path of least resistence.  The chart below is the upper level flow (about 30-35,000 feet) for Friday showing the Bermuda high to the east of Florida & a weaker high over the Rockies.  The strength of the high east of Florida will be key on how far west the system might track & just how sharp the northward turn will be. 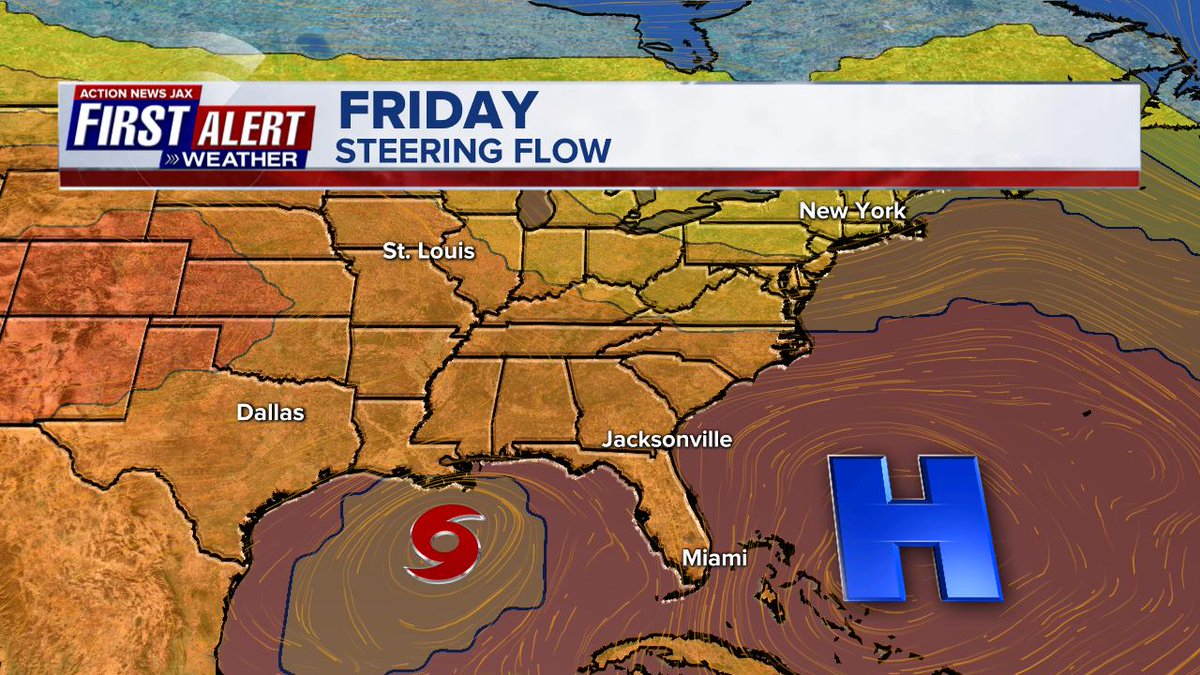 Sea surface temps. over the Gulf are plenty warm enough to support &/or help tropical development.... as highs as the upper 80s over parts of the Northern Gulf.

Rainfall forecast through the weekend is very heavy along the Gulf Coast closest to the disturbance with the potential for considerable flooding for New Orleans & much of Louisiana & Mississippi:

Dr. Phil Klotzbach, Colorado St. University produced the image below showing the Gulf is "sweet spot" for tropical development in July but - interestingly - no hurricane has had its genesis (formation) over the Gulf in July going back to 1851.  But - beware - there's a first time for everything & Barry is forecast to become a hurricane prior to landfall.

2019 names..... "Andrea" was briefly upgraded in May.  Next on the list: "Barry" (names are picked at random... repeat every 6 years... historic storms are retired (Florence & Michael last year):

Sea surface temp. anomalies show some "cool" water remaining over the E. Atlantic but avg. to above avg. temps. for much of the rest of the Atlantic Basin.....