*** Impacts from Nicole including very high rip current risk at NE Fl./SE Ga. area beaches through Fri... folks living in or traveling to the Bahamas, Florida & east coast of the U.S. should stay up to date on the latest forecasts *** ....

The most anomalous (unusual/rare) part of this storm will be the potential for a relatively strong tropical system at a rather far north latitude for this late in the season in addition to a prolonged period - ~5 days of beach/coastal impacts...

For Jacksonville/NE Fl./SE Ga. specifically (given *current* forecast of ‘Nicole’ with improving conditions from west to east & south to north from Fri. afternoon through the weekend):

* Storm Surge (water above typically dry ground at high tide) will average 3-5 feet along the coast & the St. Johns River through much of d’town Jacksonville to near the Buckman Bridge... 2-4 feet south of the Buckman through St. Johns/Clay/Putnam Co. If your property experienced flooding during Ian 6 weeks ago or Irma (2017), then flooding is probably going to occur in your area from Nicole. There may be a few spots where storm surge reaches 6-7 feet over especially Southern St. Johns & Flagler Co. where beaches & dunes have been heavily compromised by Ian. Surge values may be locally higher due to wave action, heavy rainfall &/or geographical/topograhical nuances.

* Winds - BEACHES/INTRACOASTAL/ST. JOHNS RIVER - Thu.: peak at 40-50 mph with 60+ mph gusts becoming out of the south by late afternoon into the night... Fri.: shifting to offshore - out of the west at 20-30 mph with higher gusts... much lighter winds by Fri. night/Sat.

INLAND (NEAR/WEST OF I-95) - Thu.: peak at 30-40 mph with a few 50+ mph gusts... Fri.: shifting to out of the west then northwest through the day at 20-30 mph, higher gusts in the morning, gradually diminishing through the afternoon/evening.

* Flooding will be a daily threat at the beaches, especially at high tide - becoming more significant with each day through this week. There will also be an astronomical boost due to the full moon phase (each phase of the moon is ~2 1/2 days in duration) which began Tue. Ponding & - eventually flooding - will also occur along the St. Johns River & its tributaries.

* As Nicole moves south then west of Jacksonville while turning northward, there will be a tornado & waterspout threat later Wed. night through Thu. across NE Fl. & SE Ga.

Low pressure - ‘98-L’ started to develop over the SW Atlantic north of Puerto Rico & was upgraded to subtropical storm “Nicole” early Mon., the 14th named storm of the Atlantic season which is right on avg. & close to the Nov. 19 avg. of the occurrence of the 14th named storm. Nicole transitioned to a tropical storm (purely warm core) by midday Tue. & then reached hurricane (Cat. 1) strength a bit before 6pm Wed., the 7th hurricane of the Atlantic season which happens to be right at the seasonal average which - on avg. - occurs on Nov. 15th. Nicole’s official landfall was at 3am EST on the Fl. east coast near North Hutchinson Island just south of Vero Beach as a Cat. 1 hurricane with sustained winds near 75 mph & a central pressure near 981 mb / 28.97″. Nicole was downgraded to a tropical storm about 1 hour later near 4am EST.

* This year ties the record set in 2001 for the most Atlantic hurricane formations in November, at three.

* Nicole is the second-latest hurricane ever to hit the continental United States, after only Hurricane Kate, which made landfall in 1985 along the Florida Panhandle as a Category 2 hurricane the week of Thanksgiving.

* It is the latest recorded landfall ever for a hurricane on the east coast of Florida.

Given the very warm water from Fl. to the Bahamas in addition to an upper ridge building near & north of the storm while - at the same time - an upper level trough that helped spawn Nicole weakens & moves away, Nicole managed to reach hurricane strength before the Fl. landfall early Thu. Nicole turned more west & southwest then veered more west then northwest, even N/NW at times. At the same time, another upper trough is moving into the U.S. Lower 48 helping to create the alleyway from Fl. up the eastern seaboard as the brief ridge shifts east over the Atlantic. This interplay helps to dictate the longer range movement - acceleration to the north/northeast - as well as aiding some in the strength of Nicole by helping to create strong upper level outflow + enhancing the low level “baroclinicity” - the interaction of cold, dry, polar air vs. tropical warmth & humidity. In other words, the transition back to a post-tropical low could mean a slower decrease in Nicole’s intensity even though Nicole will be losing tropical characteristics & will no longer be over the warm ocean. Nicole should dissipate or become absorbed by another midlatitude nontropical low over the weekend.

In general, conditions were at least somewhat favorable for additional strengthening before the Florida landfall. There will still be some shear + only moderate mid & upper level moisture but sea surface temps. are warm including pretty significant deep oceanic heat content (warm water to a deep depth) not to mention Nicole crossed the very warm Gulf Stream Wed. I’ve noticed multiple times over the last 20+ years that southwest moving/digging tropical cyclones often intensify.

Nicole will now gradually weaken after losing its primary source of energy - the warm ocean water. As I previously mentioned, the approaching upper level trough late in the week should help to “ventilate” the mid & upper levels of the atmosphere over Nicole which should at least maintain the storm for a longer time than might otherwise be the case. In addition, increasing southwesterly shear will be in tandem with Nicole’s movement lessening the effect of the increasing shear of the front right quadrant of the jet stream. As Nicole gets “captured” by the trough & hooks up with a cold front, there will be a transition back to post (non) - tropical that will then accelerate the storm to the northeast moving up the U.S. east coast by the weekend. Dry air will quickly spread eastward “under” - to the south - of Nicole’s center bringing a quick end to rainfall with diminishing winds & clearing skies for NE Fl./SE Ga. by late Fri./Fri. night/Sat. In fact, the heaviest, most persistent rain for NE Fl. & SE Ga. should diminish by at leastThu. night followed by scattered showers & a few t’storms Friday ahead of an eastward moving cool front extending south from Nicole.

Impacts are expected for all of Fl. - except for the Western Panhandle & the Mid & Lower Keys -... in addition to the Bahamas + parts of the Carolina’s to perhaps as far north as Chesapeake Bay & New England in the longer term. Heavy rain will cause potential flooding inland across Georgia, the Carolina’s, Tennessee, Virginia & Maryland & possibly parts of the Northeast though the fast movement will keep rainfall totals on the lower side.

REMEMBER: A skinny forecast cone only means higher forecasts confidence in the track NOT where the greatest impacts will occur. The wind field is wide. In fact, tropical-storm-force winds extend outward up to 485 miles, especially to the north of Nicole’s center. Spaghetti plots for Nicole - includes ensemble models (NOAA: address underlying uncertainties in the input data such limited coverage, instruments or observing systems biases, and the limitations of the model itself. GEFS quantifies these uncertainties by generating multiple forecasts, which in turn produce a range of potential outcomes based on differences or perturbations applied to the data after it has been incorporated into the model. Each forecast compensates for a different set of uncertainties): 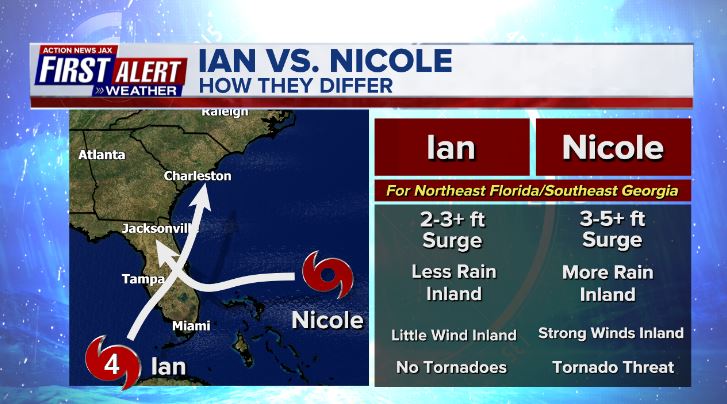 Shear is currently strong across most of the SW Atlantic with speeds of 30+ mph. However, the upper level atmosphere is undergoing some significant changes that will include somewhat less shear & a building upper level ridge to the north of the low. At the same time, a strong upper level trough will be digging into the Central U.S. & eventually into the Eastern U.S. This strong trough will be critical to the eventual movement - including curvature to the north/northeast - & intensity of the storm. The added upper level ventilation from the trough may aid in intensifying the storm some... or at least maintaining the storm as it eventually accelerates to the northeast. Following this trough, there will be a serious invasion of cold air across the Lower 48 as the tropical system seems to be a catalyst for a pattern flip reminiscent of “Wilma” in 2005 which hit Fl. Oct. 24th & was followed/guided by a deep trough moving across the Lower 48.

The upper level forecast for Fri. showing the developing alleyway from Florida N/NE up the east coast: 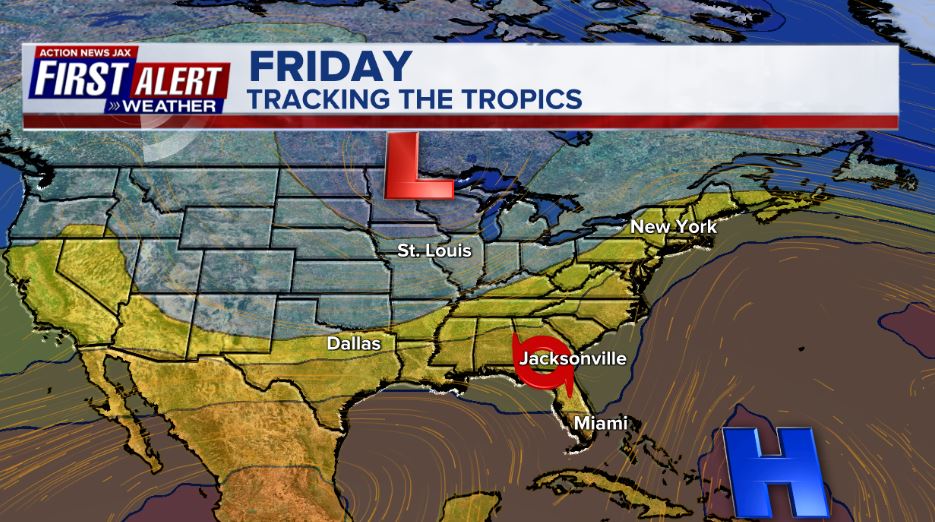 Water vapor loop shows pockets of dry air (dark blue) across portions of the Atlantic Basin along with a lot of “swirls” (low pressure) along with “bands” of higher moisture near & ahead of fronts - common as we get deeper into autumn. ‘Nicole’ will be surrounded by a good deal of dry air this week.

Averages below based on climatology for the Atlantic Basin through November:

The annual fundraiser tournament starts at 7:00 PM, and there are still opportunities to participate or donate.

UFC schedule: Every upcoming fight card, time, location, odds and how to watch

Merriam-Webster's word of the year: What you need to know