There are no areas of concern right now across the Atlantic Basin...

Low pressure - ‘98-L’ started to develop over the SW Atlantic north of Puerto Rico & was upgraded to subtropical storm “Nicole” early Mon., the 14th named storm of the Atlantic season which is right on avg. & close to the Nov. 19 avg. of the occurrence of the 14th named storm. Nicole transitioned to a tropical storm (purely warm core) by midday Tue. & then reached hurricane (Cat. 1) strength a bit before 6pm Wed., the 7th hurricane of the Atlantic season which happens to be right at the seasonal average which - on avg. - occurs on Nov. 15th. Nicole’s official landfall was at 3am EST on the Fl. east coast near North Hutchinson Island just south of Vero Beach as a Cat. 1 hurricane with sustained winds near 75 mph & a central pressure near 981 mb / 28.97″. Nicole was downgraded to a tropical storm about 1 hour later near 4am EST... & to a tropical depression Thu. evening... & declared post-tropical Fri. afternoon.

* This year ties the record set in 2001 for the most Atlantic hurricane formations in November, at three.

* Nicole is the second-latest hurricane ever to hit the continental United States, after only Hurricane Kate, which made landfall in 1985 along the Florida Panhandle as a Category 2 hurricane the week of Thanksgiving.

* It is the latest recorded landfall ever for a hurricane on the east coast of Florida. 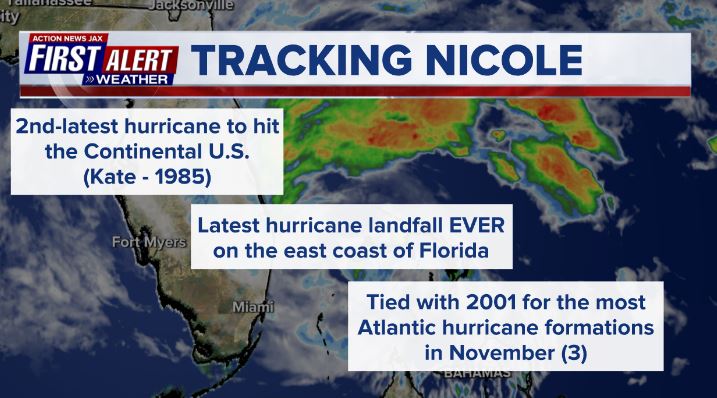 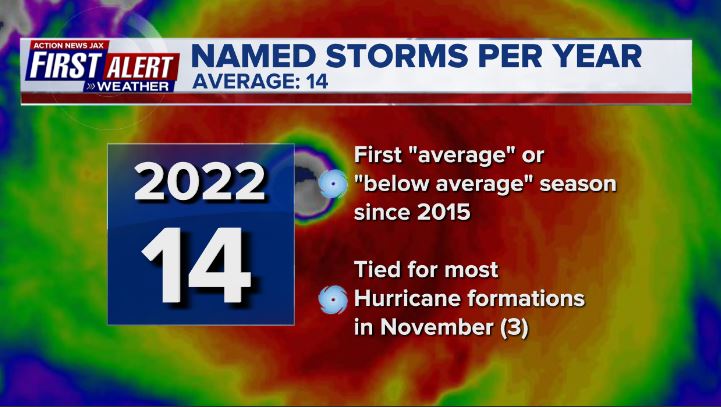 Water vapor loop shows pockets of dry air (dark blue) across portions of the Atlantic Basin along with a lot of “swirls” (low pressure) along with “bands” of higher moisture near & ahead of fronts - common as we get deeper into autumn. ‘Nicole’ will be surrounded by a good deal of dry air this week.

Averages below based on climatology for the Atlantic Basin through November:

The annual fundraiser tournament starts at 7:00 PM, and there are still opportunities to participate or donate.

Jury convicts man in killings of 8 from another Ohio family

Half-empty Idaho campus full of fear and grief after murders

Merriam-Webster's word of the year: What you need to know