The fourth oldest case in the U.S., Chiverella’s, is solved through DNA and genetic genealogy (NCD)

The 9-year-old Pennsylvania girl’s dreams were cut short one Wednesday morning in 1964 when she vanished while taking canned goods to her church before school. Her body was found hours later; she had been raped and murdered.

On Thursday, more than half a century after Marise was slain, Pennsylvania State Police officials announced that cold case detectives have identified the girl’s killer.

James Paul Forte died in May 1980 at the age of 39, authorities said. At the time of Marise’s murder, Forte was 22 years old.

“This is a very important day for our department,” Baron said Thursday during a news conference. “It is also an important day for the Hazleton community as a whole. This was a violent and heinous crime that was committed against a small child.”

Baron broke down in tears as he spoke.

“Even though it took nearly 58 years for this case to be solved, I think this should instill in the families of victims across the state and across the country a sense of hope,” the detective said. “That hope is that no matter how long it may take, we, as law enforcement, will never give up in trying to find the perpetrators of these heinous crimes that go on. God willing, in life or in death, you will be found.”

“You can pick your friends. You can pick the job you have. But you can’t pick your relatives,” Brutosky said. “I was thankful to them for providing samples.”

The Chiverella murder case began with a man in his early 20s — Forte — and it ended with one: Eric Schubert, a 20-year-old Elizabethtown College history major. Schubert, the proprietor of ES Genealogy, did the research that helped state police investigators identify Forte as the long-sought killer.

He has been interested in genealogy since he was a child and, over the past two years, has helped multiple law enforcement agencies identify alleged cold case killers.

Schubert described the Chiverella case as a “multifaceted investigation that left absolutely no stone unturned.”

“The investigation that went into all of this work was probably the hardest genealogy task that I’ve ever faced in over 10 years, as long as I’ve been doing genealogy. This was probably the hardest thing that I’ve ever done in my entire life,” Schubert said Thursday. “And it means so much to me that I was able to be on the team that could provide answers to the Chiverella family.”

Marise was one of five children. All four of her siblings, who are now in their 60s and 70s, were at Thursday’s announcement.

“We have so many precious memories of Marise,” her sister, Carmen Marie Radtke, said. Radtke was 13 when Marise was slain.

“At the same time, our family will always feel the emptiness and sorrow of her absence,” Radtke said. “We will continue to ask ourselves, ‘What would have been? What could have been?’”

Marise was a shy third grader at St. Joseph’s Parochial School in Hazelton on March 18, 1964, when she left her family’s home for the day just before 8 a.m. According to newspaper accounts published the day after the murder, it was the first time the girl walked to school alone.

Radtke and a Chiverella brother, then 11, followed a few minutes later, the Standard-Speaker in Hazleton reported. Though they, too, attended St. Joseph’s, they never saw their sister again.

She was last seen alive about 8:10 a.m. near 6th Street and Church Street, about eight blocks from her family’s Alter Street home.

When Marise failed to return home for lunch, her family realized she had not made it to school that day. They and the school notified the police that the girl was missing.

Her 55-pound body was found that afternoon by a resident who went to dump some ash in an abandoned strip mine pit near the Hazleton Municipal Airport. She had been raped and strangled.

According to news accounts, Marise had been bound and gagged, her multicolored scarf stuffed into her throat to prevent her screams. She was still clothed in a dark jacket and skirt and black leotards.

Her suede shoes, school bag and pocketbook were found nearby. The canned goods meant for the church were also found near her body.

In 1994, on the 30th anniversary of the killing, a Chiverella cousin recalled seeing Marise hurry past her own home on that bitterly cold Wednesday morning so many years before.

“It was so windy (and) she was hustling along,” Helen Slattery told the Standard-Speaker. “She was so cold.”

Slattery’s home was just two blocks from St. Joseph’s, where Slattery’s own children were also students at the time.

“I don’t know why, but for a moment I felt like going to the door and calling her in for a while to warm up,” Slattery said. “I’m so sorry I didn’t.” 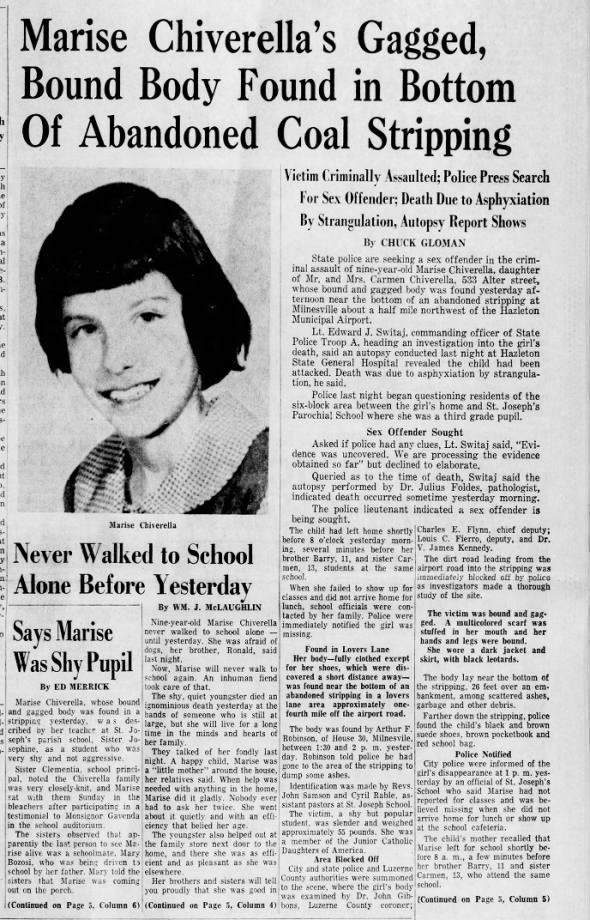 The murder stunned residents of Hazleton. Baron spoke Thursday about the way the Chiverella case changed life for many people, including the investigators assigned to solve the crime.

He said detectives are taught not to get emotionally attached to cases, but that “you can’t help it.”

“What happened to her ushered in a change in this community. Whether you like it or not, the way you lived changed after March 18 of 1964 in Hazleton.”

Though no arrests were made, state police investigators continuously looked for Marise’s killer, authorities said Thursday.

“For the first 40-plus years, the Pennsylvania State Police worked this case with old-fashioned police work,” Brutosky said. “They went out to interview people, they sent teletypes, they interviewed other people, and it went word of mouth. ‘Who do you think could have committed this crime?’”

Over the years, more than 200 troopers were involved in the case. Many of the detectives, current and former, attended Thursday’s news conference.

A small break came in 2007, when the Pennsylvania State Police crime lab was able to develop a DNA profile from a stain left on Marise’s jacket by her killer, the lieutenant said. The profile was uploaded into the national DNA database, but detectives got no “hits” on their unknown killer.

All the initial persons of interest in the case were also eliminated through DNA.

The killer’s genetic profile was checked against those in the database monthly for the next several years, with no luck. Then came the advent of genetic genealogy and, in 2018, it’s highly publicized use to track down California’s infamous Golden State Killer.

That same year, Pennsylvania investigators turned to Virginia-based Parabon Nanolabs, which developed a Snapshot DNA phenotype of the killer. The company’s system predicted the unknown man’s ancestry, his eye color, his hair color and more.

Parabon’s genealogists also uploaded the killer’s DNA profile into GEDmatch, a public genealogy database that allows users to find biological relatives they may not be aware of.

In the database, they found a very distant relative of Marise’s killer, Brutosky said.

In 2020, they turned to Schubert, who had offered his genealogical expertise after reading about Marise’s murder. During the research, detectives came across a surname from an open 1972 murder case.

On behalf of all of the men and women of the PA State Police, thank you for your assistance with this case.

They were able to use DNA collected in that other homicide to determine that they were on the right ancestral track, the lieutenant said. Through another family member, who is a New Jersey state police captain, detectives were able to obtain family trees from the family’s designated historian.

While detectives spent months in 2021 interviewing family members and taking DNA swabs to eliminate suspects, Schubert was able to help narrow down the suspect pool to four men.

Those men included Forte, who detectives learned had been arrested in 1974 for sexual assault. He became their prime suspect.

Investigators had his body exhumed in January so a DNA sample could be retrieved from the remains. The results came in on Feb. 3.

Authorities said Forte, who served only a year of probation in his 1974 sex assault case, had just one additional minor run-in with police in 1978. Never married, he worked at a local bar prior to his 1980 death, which was reportedly due to a heart attack.

Brutosky said investigators suspect that Chiverella may not have been Forte’s only victim. He urged anyone with information on this or other unsolved cases to contact authorities.

Baron said he hopes that even though Forte is out of reach of the criminal justice system, Marise’s family finds some peace in knowing who took her from them.

Radtke said her parents, who have since died, never wanted revenge on the person who killed her sister. They wanted justice.

“Thanks to the Pennsylvania State Police, justice has been served today,” she said.

6
Traffic
GA-32Road closed due to construction work on GA-32 both ways between Clyde Rollins Rd and Webb Way.
FL-134Intermittent lane closures due to maintenance work on FL-134 103rd St both ways from I-295 Exit 16 to FL-21 Blanding Blvd.

Justin Thomas: What you need to know