INA, Ill. — When Susan Lund failed to come home from the grocery store on Christmas Eve 1992, rumors swirled over what happened to the Tennessee mother of three.

On Friday, authorities in Illinois answered that question.

Jefferson County Sheriff Jeff Bullard announced that Lund’s DNA profile matched that of a woman whose head was found in January 1993 in the Wayne Fitzgerrell State Recreation Area near Ina.

The rest of her body was never found. The unidentified woman became known as “Ina Jane Doe” because of where her head was discovered.

Lund, who lived about 175 miles from Ina in Clarksville, Tennessee, was 25 years old when she vanished. She left behind her husband, a soldier stationed at Fort Campbell, their 6-year-old son and two daughters, ages 4 and 2.

She was also pregnant at the time she disappeared, according to the Leaf-Chronicle in Clarksville.

The young family, originally from Indiana, had been in Clarksville for just a few months.

The genetic genealogy work that ultimately led to Lund’s identity was conducted by Redgrave Research Forensic Services, which is based in Orange, Massachusetts.

Bullard said Friday that the 29 years Lund remained unidentified is a setback, but that it will not stop his detectives from looking for her killer. His agency is working with the Clarksville Police Department on the case.

“In most homicide investigations victim identification is done very quickly, and we can move forward following up every lead and determining victimology to try to ascertain the truth as to what happened to the victim,” Bullard said during a news conference. “That has taken much longer now, but that doesn’t stop our mission.

“Our mission is still to find the truth about what happened to Susan.”

‘I thought she left us’

Some of Lund’s siblings were present on Friday as Bullard announced her positive identification. Her sister, Pamela Reyes, spoke on behalf of Lund’s children.

“They just really want people to know that they’re grateful to find out that they weren’t abandoned by their mother. She didn’t leave her kids, not willingly,” Reyes told the Southern Illinoisan. “For her 6-year-old, her only son, it was really important for him to come to grips that his mom didn’t abandon him.”

Lund’s son, Paul Lund Jr., wrote on social media last week that he harbored anger and resentment toward his mother, who he believed had left of her own accord. He said it caused him to hesitate before letting people into his life.

“I thought she left us. Spent always thinking she never wanted us anymore, me and my two sisters,” he wrote on Facebook. “But it was never true.”

One of his sisters, Crystal Lund, responded that they would get through the news together, like they have “everything life has thrown at (them).”

Crystal Lund also criticized those who spread rumors that her father had killed her mother.

“Was my dad perfect? No, he wasn’t, but he’s my dad and I know him,” she wrote. “He was with us the night my mom was kidnapped.” 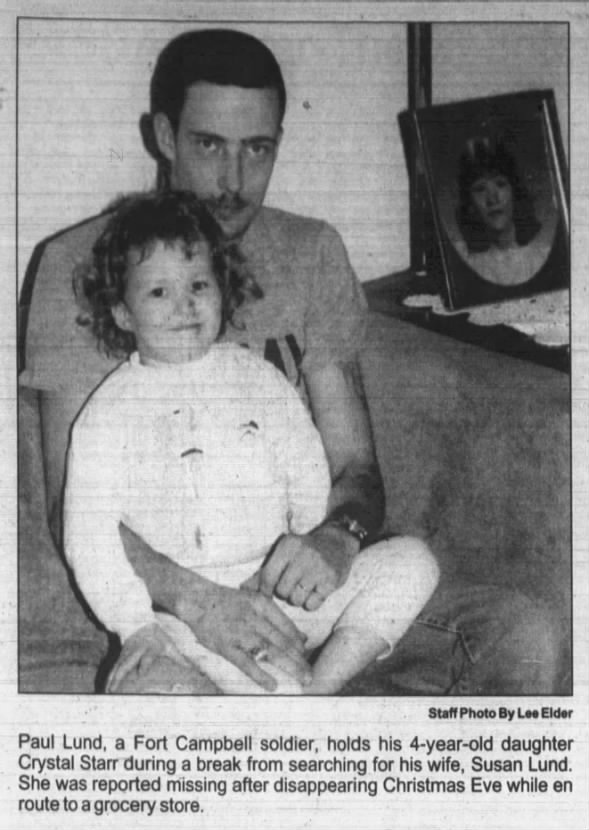 The Leaf-Chronicle reported in February 1993 that Clarksville police investigators had dropped the search for Lund after just two weeks because there had been sightings of the missing woman in Hopkinsville, Kentucky. Detectives believed she’d left on her own.

Lund’s head would be found 12 days later in Illinois.

It is uncertain whether the sightings in Kentucky were legitimate, but Paul Lund told the paper that February that his missing wife had reportedly been spotted on Interstate 65 near Louisville several weeks before looking thin, pale and dressed in the clothes she was wearing when she left home. That would have put the interstate sighting in late January or early February.

Paul Lund was convinced that his wife had been abducted.

“Sue, if you read the newspaper, come home real soon,” Paul Lund said a week after she vanished. “We all miss you and love you.”

‘It’s never been the same’

The Southern Illinoisan reported that Lund left her family’s home the night of Dec. 24, 1992, to walk to a nearby Winn-Dixie store. It was about 7:30 p.m. when she left for the store, which had closed early because of the holiday, according to the Leaf-Chronicle.

After she failed to return home, her husband, Paul Lund Sr., reported her missing.

Reyes said she believes she was the last person to speak to her sister on that Christmas Eve.

“We were making plans to talk, and I was trying to make plans to come down and visit her,” Reyes said. “It’s just, like, we were celebrating Christmas and then all this. It’s never been the same. We’ve always had a piece of our family missing.”

No trace of the missing woman was found until Jan. 27, 1993, at Wayne Fitzgerrell, a 3,300-acre park situated on Rend Lake in southern Illinois. Two young girls, ages 10 and 12, were running near a wooded roadway through the park when they came upon a grisly sight.

It was a human head, dangling in some bushes as if someone had thrown it from the roadway, according to the Doe Network.

Though Lund had been missing for more than a month when her head was discovered, authorities said she had been dead for a matter of days when it was found. At the time, the Jefferson County coroner said the remains could not have been more than two weeks old because people had been in that area within that time frame and found nothing amiss.

At the time, the skull was estimated to belong to a woman between 30 and 50 years old, Illinois State Police officials said.

“Unusual skeletal characteristics of the skull and upper front cervical vertebrae indicate the victim suffered from chronic spasmodic torticollis, or wryneck, a condition which causes stress on the muscles which are responsible for maintaining upright head posture,” state police officials said. “Evidence of a healed traumatic lesion on the skull suggests this condition may have been preceded by head trauma.”

The condition would have resulted in a leftward tilt to the woman’s head.

A sketch of the woman was produced, along with a facial reconstruction. Both illustrated the suspected torticollis, including facial asymmetry, but to an extreme degree.

Authorities used that image, along with the woman’s extensive dental work, in their efforts to identify her, but they had no luck. The case ultimately went cold.

In February 2021, Michael, an assistant professor of anthropology in New Hampshire, reached out to Bullard’s detectives to offer a fresh look at the case using updated forensic methods. Michael said Friday that as a native of Illinois, she was long familiar with the unsolved case of Ina Jane Doe.

According to Bullard, his office turned the evidence over to Michael and her team, who discovered new details about the victim through their work.

“And it was impressive work that led to break open the case,” the sheriff said.

Part of what was discovered related to the torticollis from which the unidentified murder victim appeared to suffer.

“I determined that the facial asymmetry that Ina Jane Doe expressed was more mild than originally thought,” Michael said.

Watch Friday’s announcement in the Ina Jane Doe case below.

That finding led to a new forensic sketch of the woman by artist Carl Koppelman, who works with law enforcement agencies across the country on cold cases.

As Michael and her team were working on their analysis, cold case detectives sent samples from the unidentified skull to Astrea Forensics so experts there could create a DNA profile suitable for use in genetic genealogy.

The company extracted fragments of the woman’s genetic material from the samples and used DNA sequencing to enhance the profile. It was then sent to Redgrave’s genealogists.

The DNA data was uploaded on Feb. 3 to GEDmatch, a public DNA database that people use to find long-lost relatives and details of their ancestry. The database produced multiple matches with families who shared some of their DNA with the slain woman.

The 10-member genealogy team, led by lead genealogist Anthony Redgrave, came upon possible relatives on both sides of Lund’s family within a day of receiving the matches. From there, they narrowed it down to her immediate family.

“We found that this couple had several children, including Susan Lund, and she did not have a documented death date,” Redgrave said Friday. “And there was no evidence of an address or proof of life activity after 1993.”

Additional research showed that Lund had been reported missing by her family the month before the unidentified murder victim was found, Redgrave continued.

The information was passed on to detectives, who followed up with Lund’s family. One of Lund’s siblings provided a DNA sample for direct comparison and on March 6, they got the news they’d been waiting nearly 30 years to receive.

“I cried most of the day. We had been looking on and off, when we could, to find her,” Reyes said.

Reyes described her sister as a kind hearted woman who was loved by everyone who knew her. She said her tears soon turned to anger.

“I was angry because she’s been there for 29 years,” she said. “But we’re relieved now.”

The homicide investigation into Lund’s death remains active. Anyone with information about Lund on or after Dec. 24, 1992, should be directed to Detective Capt. Bobby Wallace at the Jefferson County Sheriff’s Office at 618-244-8004, or via email at bwallace@jeffil.us.

Numbers drawn for $700M Powerball prize, 10th biggest in US