Jacksonville, Fl — Jacksonville/NE Fl. & SE Ga. are in the midst of the coldest time of the year. On average - climatologically - mid January is the the coldest with an avg. low in the low 40s & an avg. high in the mid 60s. It’s only up from here folks! We’ve had but 5 official freezes (at JIA) with inland freezes common into mid Feb. & into March well inland. 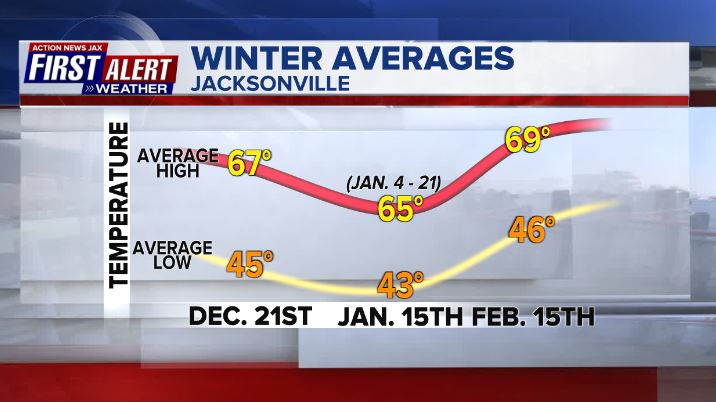 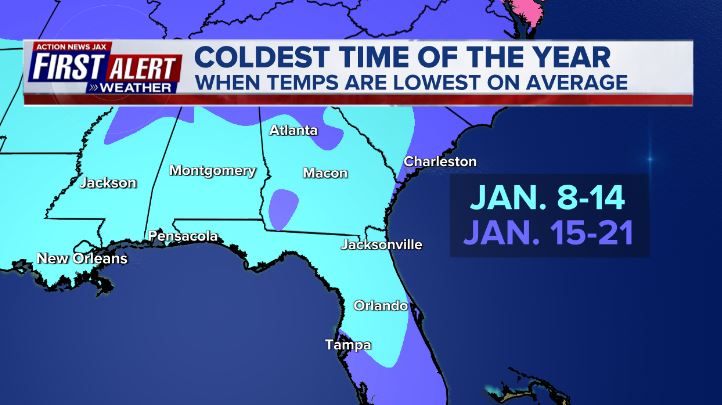 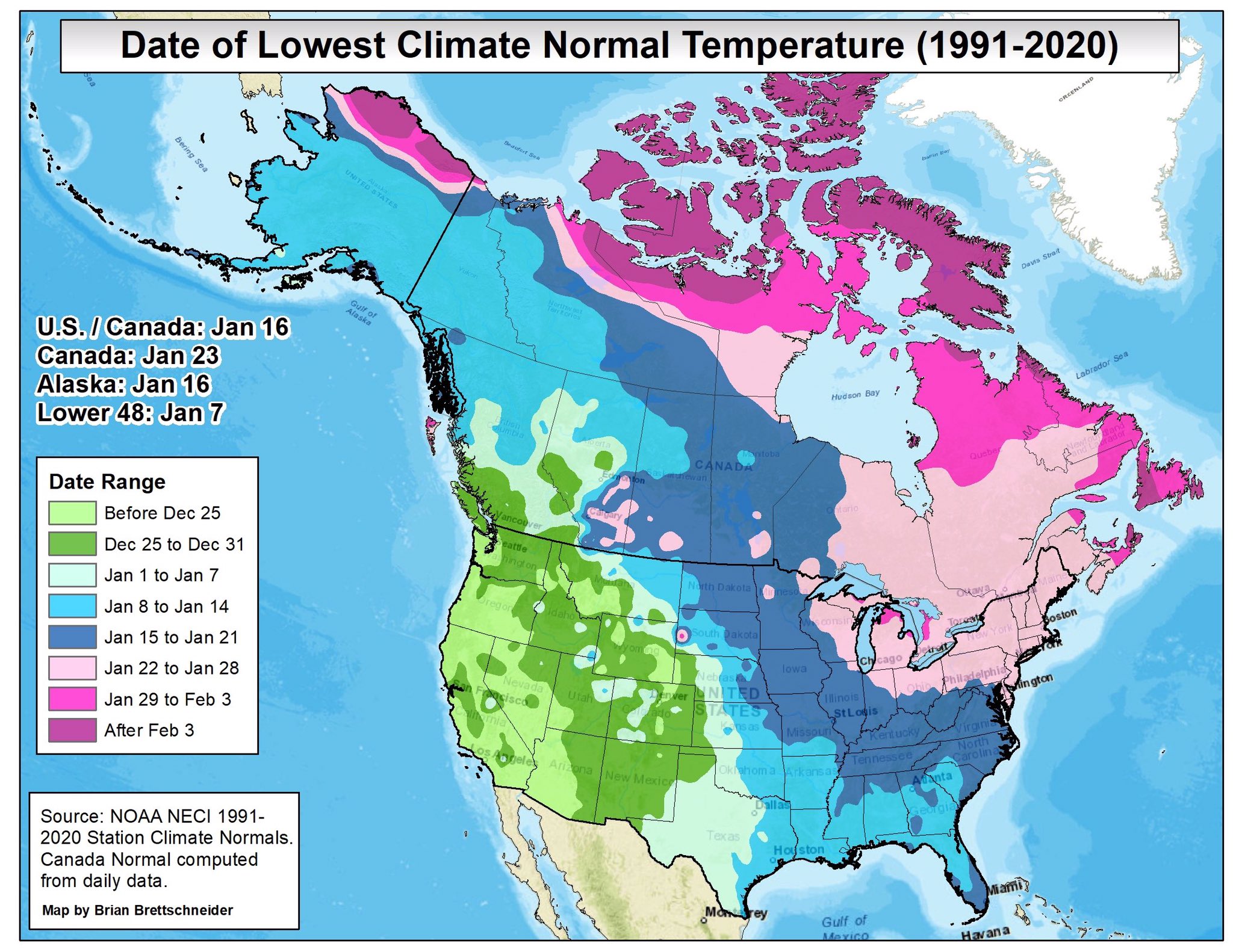 Lots of banter about the “atmospheric river” these days as the west gets pounded by storm after storm. Several important points:

* the phenomenon has been going on for eons but in recent years has been latched onto by the mainstream media making for over-the-top headlines with very little context.

* not a product of climate change though there appears to be some evidence that the atmospheric river may be augmented *some* by overall warmer air & sea temps.

* as defined by the American Meteorological Society: A long, narrow, and transient corridor of strong horizontal water vapor transport that is typically associated with a low-level jet stream ahead of the cold front of an extratropical cyclone. The water vapor in atmospheric rivers is supplied by tropical and/or extratropical moisture sources. Atmospheric rivers frequently lead to heavy precipitation where they are forced upward—for example, by mountains or by ascent in the warm conveyor belt. Horizontal water vapor transport in the midlatitudes occurs primarily in atmospheric rivers and is focused in the lower troposphere. Atmospheric rivers are the largest “rivers” of fresh water on Earth, transporting on average more than double the flow of the Amazon River.

* though causing damage & injury, the storms are a welcome respite from a long term drought. Some parts of California & Nevada have already achieved their average winter rain &/or snowfall. Once melting occurs at higher elevations in the spring, thirsty reservoirs & lakes should be higher than they’ve been for many months if not years. The image below shows the big increase in “reservoir + snowpack” while the reservoir storage is still well below avg. - an indication of just how low levels were coming into this wet season. 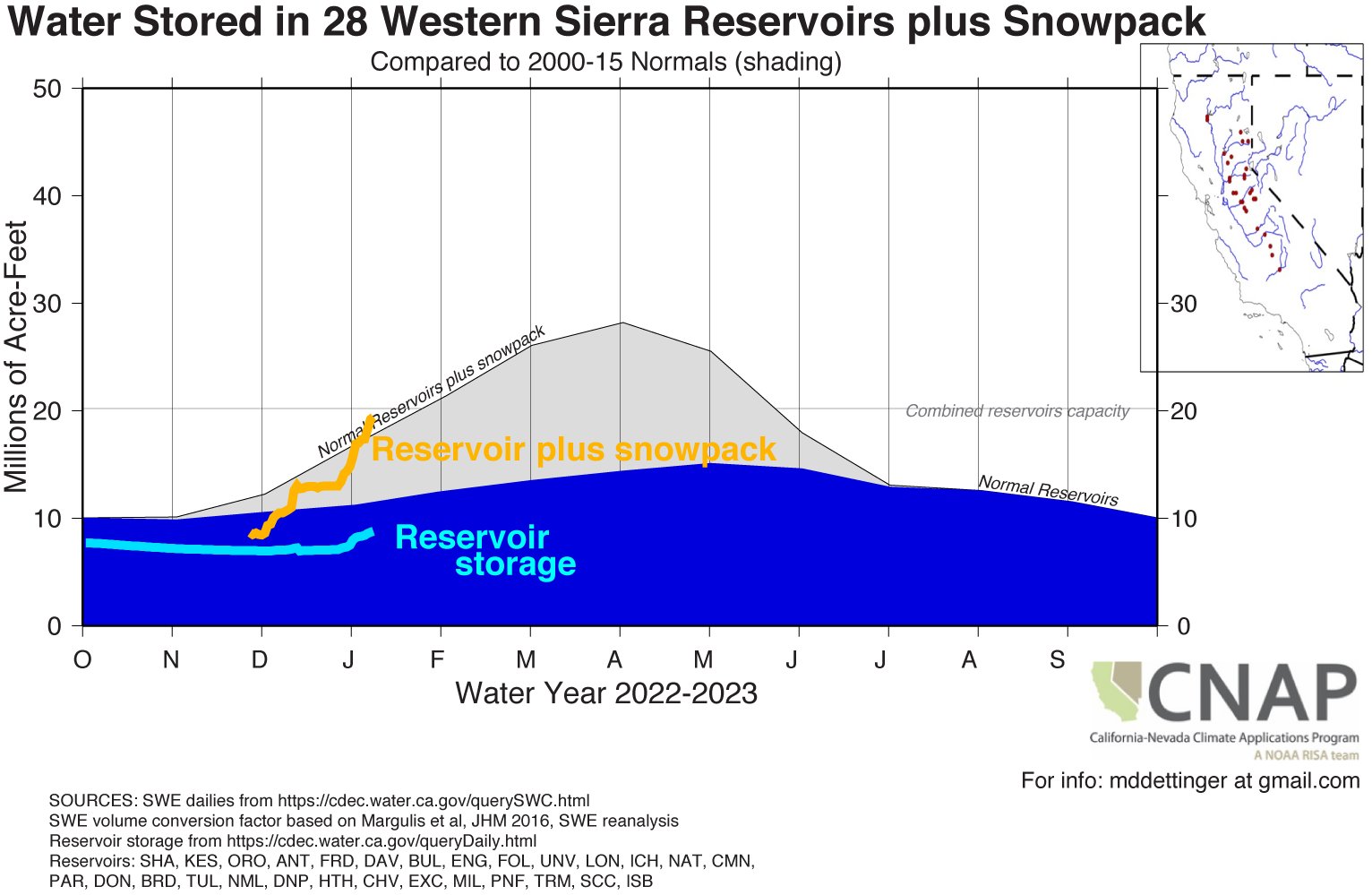 Snowfall has been away above avg. so far in the Sierra’s of California & - in some cases - are near or above the avg. by April 1st!: 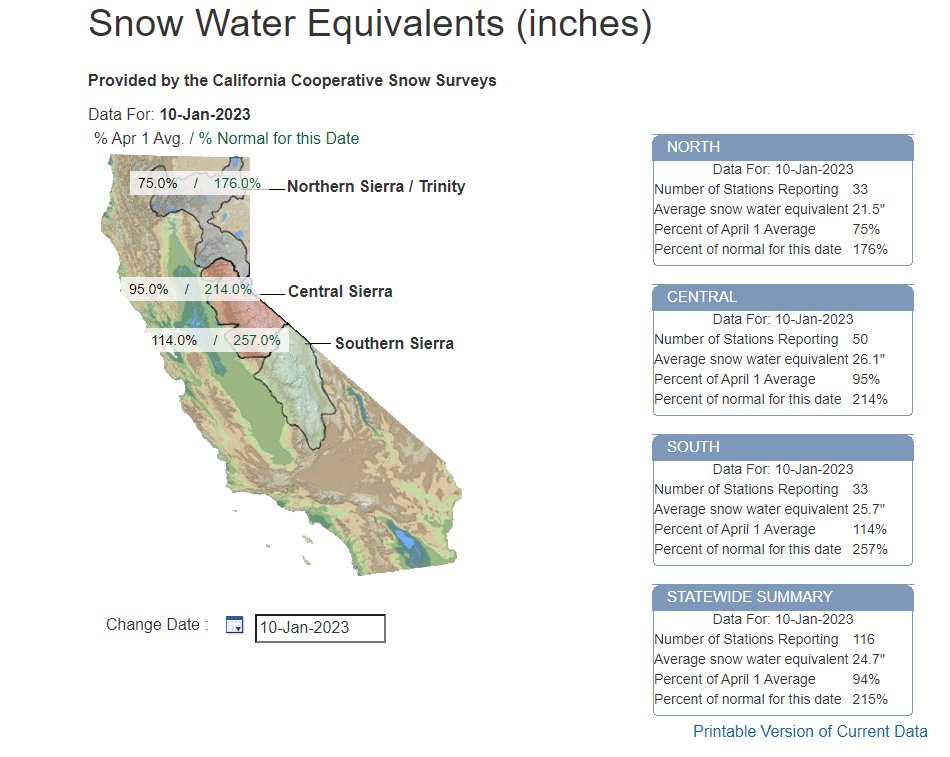 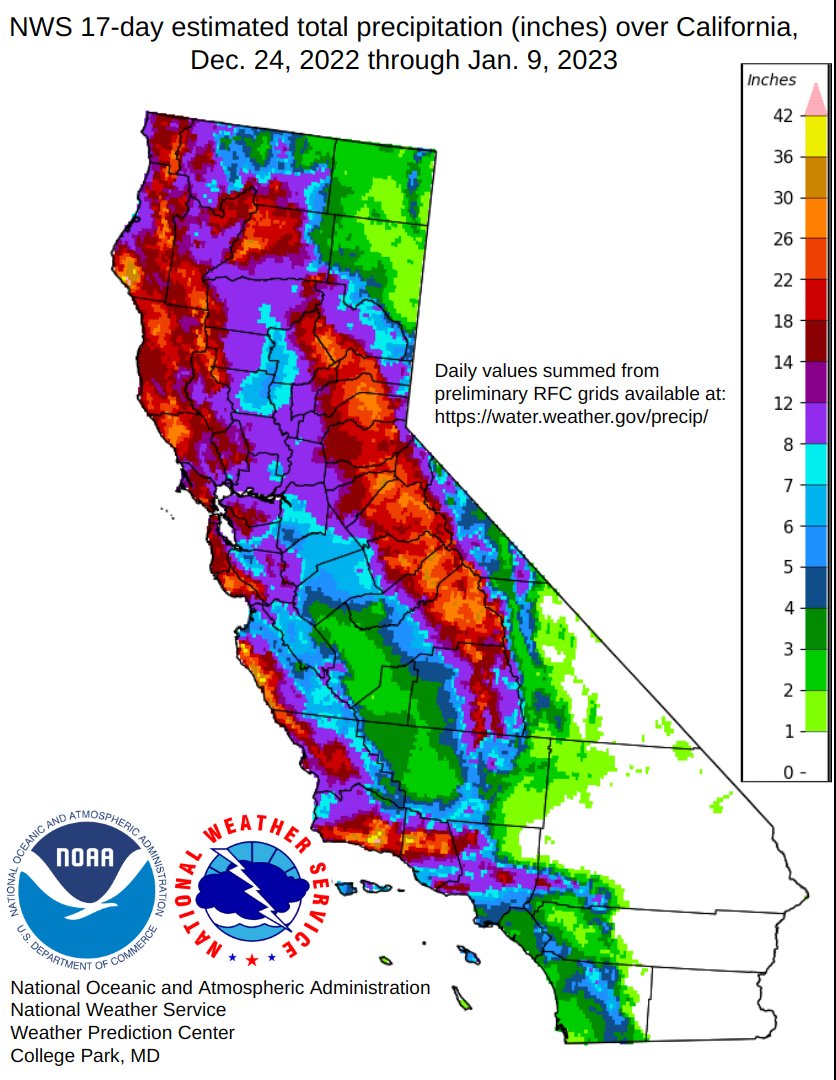 Jan. 18 (dawn): The thin waxing crescent and Antares rise together about 1½° apart in the southeast.

Jan. 22 (dusk): Look low in the west-southwest to see Venus and much dimmer Saturn just ½° apart. Find a clear horizon to enjoy the view.

Jan. 25 (dusk): High in the southwest, the waxing crescent Moon hangs some 3° below Jupiter.

Jan. 28 (dusk): The first-quarter Moon is positioned about halfway between Mars and Jupiter, with Venus and Saturn close to the horizon in the west-southwest.

Jan. 30 (evening): The waxing gibbous Moon appears within ½° of Mars.

Feb. 3 (evening): In the east, the waxing gibbous Moon and the stars Castor and Pollux in Gemini form a neat line.

Feb. 10 (evening): The waning gibbous Moon rises with Spica, in Virgo, with 2½° between them.